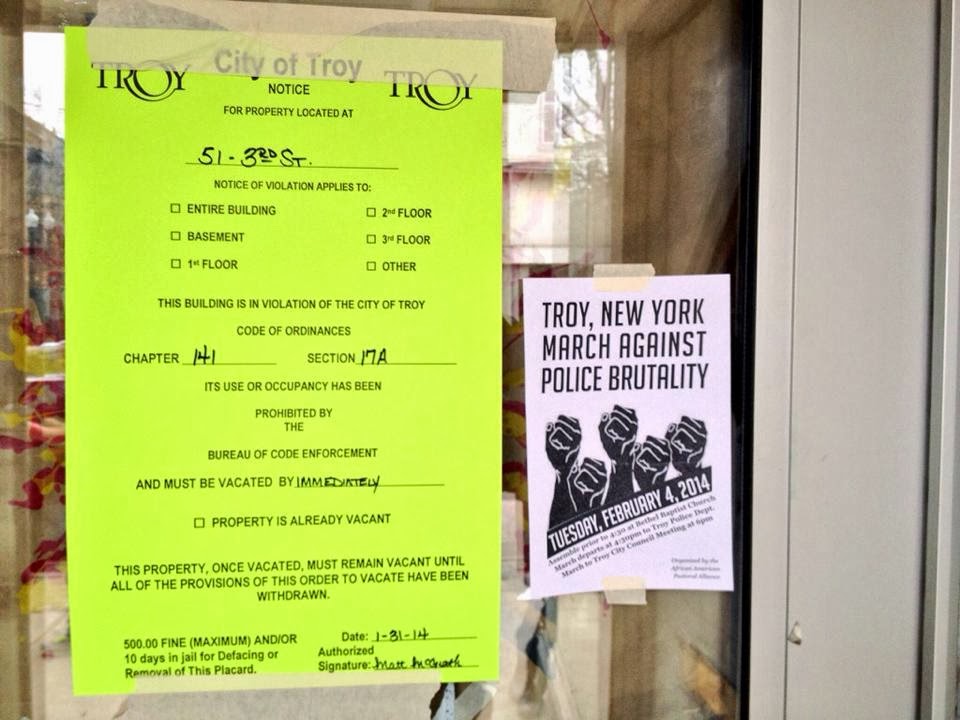 On Friday, the city shuttered 51 Third St., where, according to a number of reports on social media, supporters of Tuesday night’s march were … well … among other things rallying support for the march.

(OK, HQ may be a little strong as a way to describe 51 Third St., but there were supporters of the march's cause working out of the building and if I were a cynic, I would say it was a message to those supporters as a way for the city to keep attendance at the march as small as possible.)
According to the bulletin taped to the door, it was shut down for not having a certificate of occupancy - which is what Chapter 141, section 17A of the city code means.


The Third Street building is owned by Igor Vamos, who is a professor of media arts at Rensselaer Polytechnic Institute. According to his profile on the college’s web page, he is widely known as “Mike Bonanno” of The Yes Men. He along with another actor made national, and maybe international news, impersonating “captains of industry” and surprising “unsuspecting business audiences with satirical, poignant actions that comment upon pressing social and environmental issues.” I could not contact Vamos for this story.


The building has been most recently used as a sort of clubhouse for like-minded activists in Troy and once was home to the Troy Bike Rescue. According to the Facebook page “51 3rd St.,” is “home of a bunch of cool cats, dogs and hot Hippopotamuses who like Shows and putting on Shows ... Some of us like cooking, dancing, Japan, meditation - still others engage in watching movies - while some dabble in quantum physics Ming FU, time travel or hobby in shot gun golfing the great American sport.


“We are mythical beasts of high order, our doors open to friendly fellow travelers of all types, visit our playground.”
The page said the group hosted Hannah Dobbs for a Q&A session on Jan. 28 and on Jan. 23 it hosted “Pasties, Pencils and Pints.” The building has been hosting such events since December of 2010.

The march is in response to the melee at Kokopellis bar last week where a number of people, including the African American Pastoral Alliance, claim police used excessive force when they entered the bar at shortly before 3 a.m. Police maintain they were called to a violent scene already in chaos and used force necessary to bring the situation back under control, and in particular place Joshowan Donley under arrest.
Surveillance video released by the bars owners, Barry and Joe Glick, seem to indicate the crowd was leaving in an orderly fashion before police came and then chaos erupted.
In all five other people were arrested Saturday morning for such crimes as harassment, disorderly conduct and resisting arrests. Eight police officers were injured, six required hospital care. Police are currently investigating other crimes that occurred outside the establishment such as throwing a garbage pail through the back window of a police cruiser and throwing bottles at officers. Police released radio transmissions asking dispatch to contact other agencies for assistance.