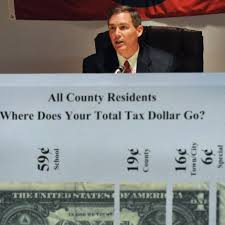 Rather than face a call for his resignation, Chairman of the Rensselaer County Legislator Martin Reid adjourned Tuesday's monthly meeting before the “Legislator’s Privilege” piece of the agenda - which gives the elected officials the opportunity to speak on whatever is on their minds.
“Mr. Reid’s actions tonight reinforce why we are calling for his resignation immediately,” said Legislator Len Welcome, D-Troy, one of six Democrats on the 19-member body in a press release. “We had planned to ask Mr. Reid to do the right thing and step down as chairman.”
Reid came under fire after a state Department of Labor administrative law judge found he had “willfully and intentionally misrepresented the facts” in order to collect some $15,300 in unemployment benefits. Reid began collecting after he was let go from a nearly $80,000 job at the state School Boards Association. He failed, however, to tell the DOL he was working as chairman of the Legislature at an annual salary of $30,000.

Reid did reach a settlement with the DOL that includes paying a $2,300 civil fine and repaying the $15,300 out of any future unemployment benefits he receives, according to the Times Union.
The Department of Labor has referred the case to District Attorney Joel Abelove to investigate and possibly prosecute. Abelove has not yet said if he intends to follow through.
“Since that time, numerous constituents have contacted me to express outrage at these findings, which involve the wrongful taking of taxpayer funds and a violation of the public trust,” said Legislator Cindy Doran, D-Troy, in a statement she was prepared to read before Reid cut the meeting short. “I am calling for Chairman Reid to resign his chairmanship post immediately so that the Legislature may move forward under new, unblemished leadership.”

“I believe Chairman Reid’s continuing leadership of the Rensselaer County Legislature is inappropriate and that it will distract from the important work we have been elected to do,” said Legislator Gary Pavlic, D-Troy.
“What galls me is the fact that he has not repaid the $15,335 which he obtained by dishonesty and deceit,” said Legislator Mark Fleming, D-Troy.
The "Legislator's Privilege" is on the Feb. 10 agenda and is slated or the last item of business before the meeting is adjourned.
Reid, and the majority’s spokesman Rich Crist, could not be reached for comment.
(As an aside, this is the first time the Democratic minority has done or said anything of significance in more than a decade.)
Posted by Unknown at 7:30 PM