Members of the Troy Police Benevolent Association ratified a contract that includes a 2 percent retroactive raise for 2011 and a 0 percent raise in 2012, according to President Bob Fitzgerald.


Other major provisions in the contract, that now has to be approved by the city Council, include:
-An addition week of vacation time for junior members, which equals about half the police force.
-A $300, one-time bonus for any officer working in 2012.
-$300 off the premium for anyone opting to use the dental insurance after retirement
-And rank-for-rank substitution for patrolmen and sergeants when there is a vacancy on any given shift.
“He truly respects the membership and that came through in the negotiating process,” Fitzgerald said of Mayor Lou Rosamilia. “But he made clear the city didn’t have the means to offer anything more than the 2 percent, and that he was not going to put it on the taxpayers’ backs.”

Fitzgerald said the contract was ratified by some 80 percent of the membership.
As with any contract, raises are a sticking point and one way the two sides agreed upon the 0 percent in 2012 was with the $300 bonus for all officers working during that year. Fitzgerald it is not unlike the city’s deal with the Uniformed Firefighters Association and the Command Officer’s Associations of Troy, the union representing police department captains.
The added week vacation, Fitzgerald said, is a partial give back from some 15 years ago when the city was in such financial distress that it was almost forced to declare bankruptcy. At that time, the vacation time for new hires was set at five weeks but was reduced to two during negotiations. While the out of pocket cost for the city didn’t change, it did save money by not having to fill the vacancies created by vacationing officers with others on overtime. 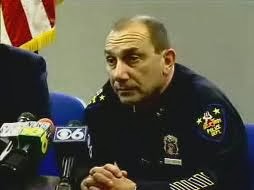 The rank-to-rank provision requires that a sergeant be called in or assigned should there be a vacancy on any shift that requires a sergeant. Under the current agreement, a patrolman could act as a sergeant making sergeant’s wages - plus any applicable overtime based on those wages - for that particular shit. Similarly, if a there is a slot for a patrolman vacant, it can only be filled by another patrolman and not a sergeant making patrolman’s wages and any overtime.
Chief John Tedesco said he was left out of the negotiations and the city was instead represented by Police Commissioner Tony Magnetto and Deputy Mayor Pete Ryan. The chief said, without seeing the actual document, the contract sounded like a “giveaway to the PBA.” In particular, he said the rank-to-rank substitution and an additional week vacation for such a large block of officers will cause an undue increase in overtime.
Fitzgerald said he would still be the point man in future negotiations even though he announced he would retire sometime this year.
The Council could address the contract as early as next month’s regular meeting.