The Finance Committee will meet first following the 6 p.m. hearing tonight where four people will answer questions from the Council and the special meeting will convene shortly thereafter.
There are no names associated with the legal notice and it’s unclear if any names will appear on the actual ordinance the Council will vote on tonight.
Obvious names include Fire Chief Tom Garrett, Planning Commissioner Bill Dunne, Deputy Mayor Pete Ryan, Assistant Planner Andrew Kreshik and possibly Mayor Lou Rosamilia.
It’s unclear how the Council will vote but I’m hearing it won’t be unanimous. 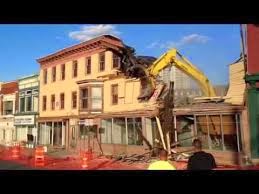 The special meetings follow last week’s hearing that included testimony from former City Engineer Russ Reeves - who resigned amid the King Street demolition and demolition project at King Fuels in South Troy – and his assistant Barbara Tozzi, who submitted her retirement papers earlier this week.
Tonight, the Council will hear from four people: Mike Cristo, who owns the company that demolished the King Street buildings; Flora Carr, who was the point person for Bethel Baptist Church when it wanted to buy land behind Bomber’s Burrito Bar on King Street; Jack Haley, an engineer who was initially called to inspect the common wall between Bomber’s and the buildings that were demolished but was called off at the last minute; and Ryan Preston, who was described to me as an engineer working for the Troy Local Development Corp.
Those four witnesses are testifying of their own volition and were not issued subpoenas.

The FBI is investigating the King Street demolition as well as the proposed and squashed sale of the Scolite property and the installation of sidewalks in North Central. The King Fuels demolition was shut down while state and federal agencies investigate the discovery of asbestos at the site.
Posted by Unknown at 8:32 AM