The Council's answer to the fiscal crisis: spend money (UPDATED)

The 2015 budget has two huge one-shots – one is the deferral of a $1.9 million pension payment to next year and one is the $650,000 sale of the old City Hall site – the state Comptroller said the city spent $5.9 million more than it took in from 2011 to 2013, sewer rates increased by 35 percent, all six unions are without a contract, the water and sewer funds have been raided and re-raided, there are hardly any reserves to speak of and Moody’s Investor Services just gave Troy a negative outlook.
So how does the city Council address any or all of the city’s fiscal problems? It convenes a special meeting for Jan. 22 at 7:15 p.m. with the purpose of hiring Adam Sanzone as its “confidential secretary.” Sanzone was an intern with the Council and has videotaped Council meetings free of charge so they could be broadcast on public access television.
The legal notice says the Council will set the salary at the meeting but there is no “confidential secretary” listed in the budget. There is $10,000 allocated for a “confidential assistant,” which I assume is the position the Council wants to give Sanzone, but there is no “confidential secretary.”
I don’t know the nuances of what is a proper legal notice and what isn’t but in the least the Council will have to amend either the budget or the resolution so they match up.
﻿
This hire, should it pass, comes on the heels of the Council appointing an assistant city clerk for $27,835.
This also comes on the heels of Mayor Lou Rosamilia answering the Council’s request to make a list of cutting each department by 3 percent. It really came as no surprise when the list included laying off firefighters and police officers, and it came as less of a surprise to watch the Council punt on layoffs or doing anything else to address the financial crisis.
Actually the Council is going the other way – they are spending money. True, the two positions mentioned above are or were vacant, but you would think not filling positions would cause less pain than “unfilling” them through layoffs.

The assistant city clerk, maybe I can see but I'm not sure what a confidential assistant/secretary for the Council actually does. And if there is a job description, why does it include being confidential? Is the Council hiding something? I'm being facetious, but still. I know $10,000 isn't a lot of money, relatively speaking, but you have to start somewhere and if you add up enough $10,000 savings you close the deficit.

CORRECTION: The job of legislative liaison is currently being performed by Emily Rossier but will now be performed by Sanzone. If Sanzone's appointment isn't confirmed, Rossier will continue in the post. Also, the assistant city clerk position was open when the mayor hired Lou Schnieder to replace Kathleen Cassidy Ryan, who was working in a secretary-type position. So, as members of the Council pointed out, the mayor is just as guilty of filling vacant positions.
Also, notice the time of the special meeting … 7:15 p.m. According to the city code:  “All meetings of the City Council, regular or special, shall be held in the Council Chambers of the City hall at 7:00 in the evening unless some other place or time has been voted by a majority of the members of the Council or unless a written call for such meeting, signed by five members of the Council, is filed with the City Clerk 72 hours prior to the time of the meeting and due public notice has been given of such change or changes.” 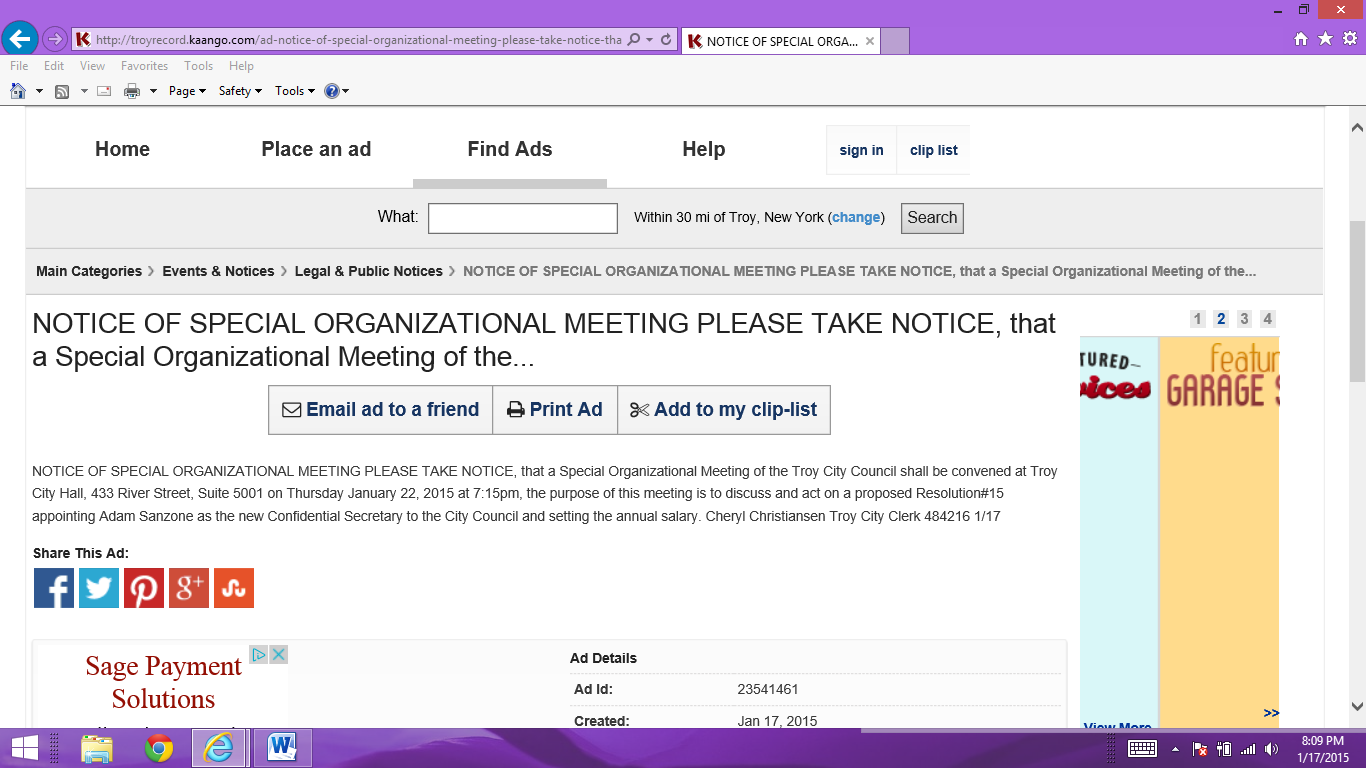 I’d be willing to bet five members of the Council did not sign a “written call” to change the meeting time. I’d be willing to bet too that the Council will be hard pressed to get five votes to hire Sanzone – who is not really political but is tight with some Democrats.
If you remember, Councilwoman Lynn Kopka, D-At Large, made a stink about the time of a special meeting once and the majority – an odd mix of four Democrats and two Republicans - were forced to reschedule.  Let’s see what she does this time.