'Draft Mark McGrath' signs were funny, but they weren't a prank 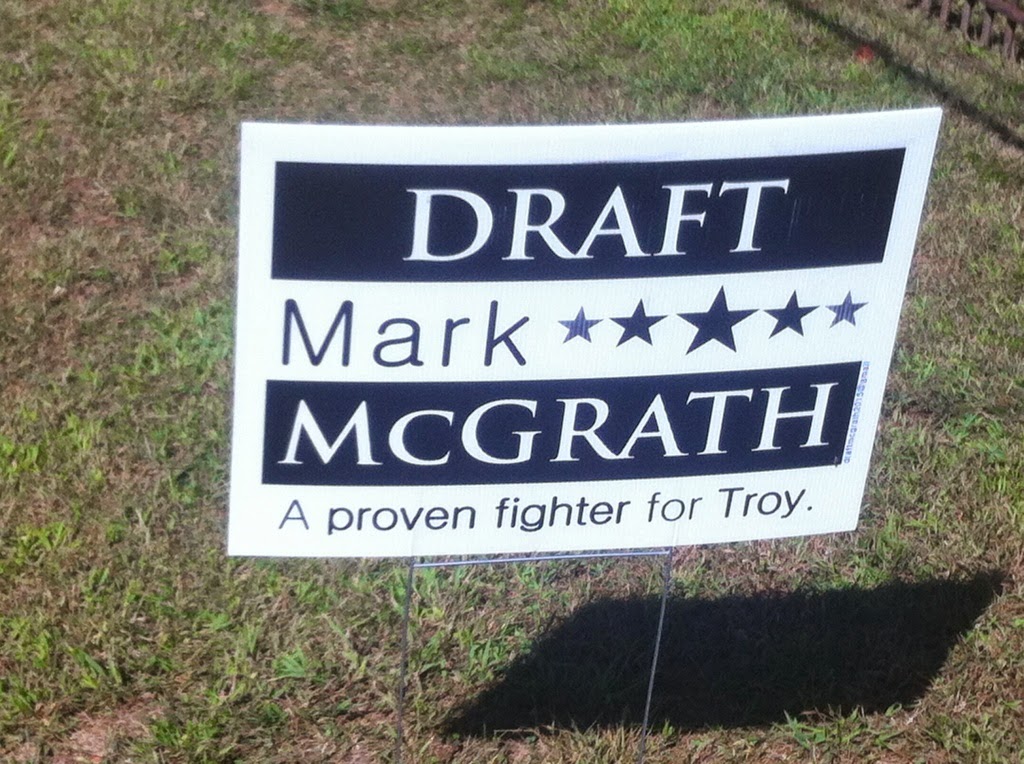 In what is one of the funniest political gags in a long time someone, or a group of people, littered the landscape with campaign signs for a candidate that has been nothing but coy about his future ambitions.
Black and white “Draft Mark McGrath” signs were put up hours before the Uncle Sam Parade stepped off and minutes before speculation over who was actually responsible for putting them up hit social media and the telephone lines.
Without even reaching out to him, McGrath, the former councilman in District 2 who has not really given a straight answer whether he will run for mayor next year, sent a text saying he had nothing to do with it.
Some believe that’s the case. Others aren’t so sure.
Still others swear Kevin McCashion, the Twitter animal who coined #troycrazy, was behind the entire plot. I don’t know if he is or is not, but I know he did Tweet a photo of a “Draft McGrath” sign that was placed in front of what he claimed to be the home of Councilwoman Anastasia Roberston, D-District 2. You have to admit that’s pretty funny.
But, since now is the time when the jockeying starts for any mayoral hopeful, the signs can’t be discounted as a simple prank. In the very least, it has people talking. If it was a prank, it was hysterical. If it wasn’t, it’s a pretty clever maneuver.
McGrath along with Councilman Jim Gordon, R-District 1, are the two credible names bantered about with the most regularity as Republican candidates.
Gordon, I think, wants it more than McGrath and Gordon probably has more support among the Republican Party proper than McGrath. But, Gordon would also have to give up his Council seat to run for mayor and he has a full time job. McGrath is retired from the state Comptroller’s Office and really has nothing to lose with all the time in the world to try
McGrath, appearing on Talk 1300, said he isn’t liked by the mainstream of either party. And while that much is true, it is common knowledge being a political outsider plays well with voters and he just recently started making it a bigger issue that it is. He was elected to four terms with Republican support, after all.
His shoot from the hip style is endearing to those who agree and infuriating to those who don’t. I think though, that style plays well with the voters – if not the insiders - of both parties too. That said, he is an enrolled Conservative adding another dimension to the mix should there be a primary.
Gordon, on the other hand, works in a political job and is a Republican through and through. While he has, in his first nine months on the Council, played nice with the Democratic majority, the Democrats are split so his vote and the vote of his GOP colleague, Councilman Dean Bodnar, R-District 3, are needed by Council President Rodney Wiltshire. And for those votes the Republicans got committee chairmanships and appointments. It wasn’t done on the count of any ideology outside of partisan politics.
That said, Gordon has worked his way up the ranks doing a host volunteer work for the party and his Lansingburgh neighborhood. Something McGrath can’t really put on his resume.
To make a long story short. I don’t think the signs were a prank at all. I think they were a well-planned - and well-played - move to force the Republican hand and come court him to run for mayor. McGrath may or may not have known about it, but there are some in the GOP who think he is their best shot at beating Mayor Lou Rosamilia should he run for re-election next November - or any other candidate for that matter.
(As an aside, I was talking to someone who was postulating on the possibility of a Wiltshire vs. McGrath race next year. He said, and I paraphrase: “It would be a macho kind of race … you know, who can bench the most weight, who can run up The Approach faster and who can win a stare-down contest.”)